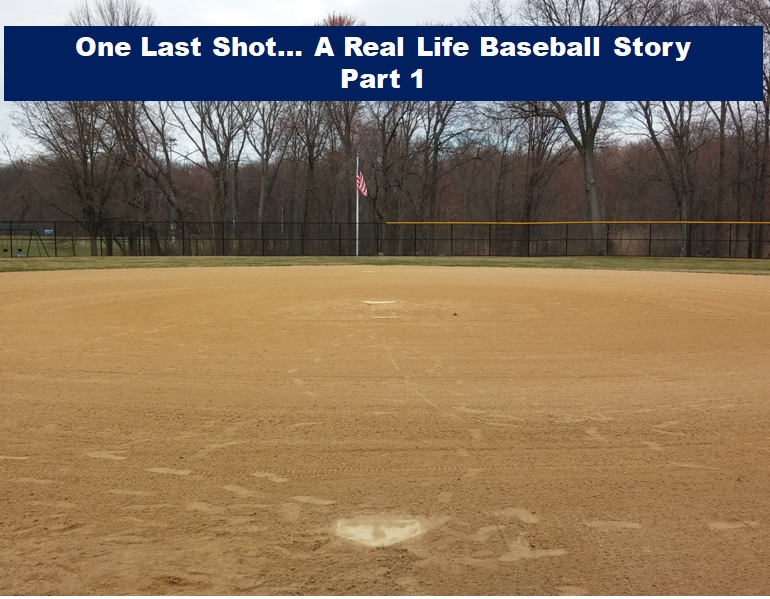 I am fifty years old. I’ll turn 51 this summer. I’m no longer young. I’m not as flexible, strong, or physically able as I used to be. All of this comes with age. Of course. I’m not in the best shape of my life, but I’m not in bad shape. Last November, I ran the New York City Marathon. I was slow (4:47:47), but because I was coming off a torn Achilles and was under-trained, I was pleased. In the first Rocky movie, Rocky said, “All I wanna do is go the distance.” I went the distance. It was my 21st lifetime marathon. Not bad.

I also still play in two pretty competitive men’s softball leagues. One league is a 30+ league where I’m becoming one of the older players. I still play shortstop and handle myself well enough. The other league is a 50+ league where I play more of a utility role. That team won the league’s championship last year.

I love to play ball.

When I play ball and when I run in big races, I can often recapture the dreams of my youth… dreams that involved being a famous baseball player, specifically, a Yankee. When I make a great play, or deliver a clutch hit, or as people cheer me as I run past them in a big city, I can almost imagine what it would have felt like to be a Yankee. I like to share that I wore #2 as a kid, long before Derek Jeter wore it. It seemed, to me, at least, that the Yankees were holding the number for me.

While I still play ball somewhat well, and while I still run, I’m still not in my best shape. My chiropractor suggested the other day that I could afford to lose a few pounds. Ugggg. Middle-age is not always fun.

About a week ago, two of the dads of children in my school, Ryan Yates and Eric Fluet, were talking about a baseball league – baseball, not softball – that they were creating a team for. It’s a 35+ plus league that only uses wood bats. As they talked, and I listened, I was invited to join the team. I wasn’t sure if these men were serious.

My first instinct was to say no and laugh off the idea.

I haven’t played baseball since I was 16 year old. That was my last year in any organized baseball league. I pitched that year (not all that well) on the JV baseball team for my high school.

I then found out that these baseball games will be played on Sunday mornings. That is when one of my softball teams plays. The conflict seemed unsolvable. But as we talked, I learned that this league starts in April and my Sunday Morning softball doesn’t start until late May or June. If they wanted me for part of the season, I actually could play at the start of the season and sporadically there after.

But I can’t play baseball any more.

Baseball has always been a big part of me. Much of who I am centers around baseball.

I still dream of being a Yankee. One day when I retire, I’ll attend a Yankees Fantasy Camp. But that’s years away.

As a dad, I taught baseball to my kids. And, for more than 15 years, I lived baseball as I coached all three of my sons through the majority of their recreation baseball league careers. I haven’t played baseball in a long time, but I haven’t been totally away from the game.

More reality then slapped me in the face – I then realized that since my children have grown, it’s been a long time since I even coached – six years at least. (Where does the time go?)

As the conversation with these men continued, I couldn’t help but wonder if I still had it – whatever that “it” was or might have been. I offered, “I am intrigued by the idea. I’m old, way too old. I haven’t played baseball in a long long time. I’m quite certain I can’t hit a baseball any longer. A softball, yes. But we play slow pitch or arc. I don’t think I can catch up to a fastball any longer.” (Truth be told, I could never hit a fastball.)

And then I suggested, “But if you DH me, I could probably…pitch.”

To my surprise, they all seemed to think it was a good idea. I was told, “If you want to pitch, you’re on the team.”

I had a lot to think about.

A few days later, I wrote the following to the team captains, Mr Yates and Mr. Fluet, “My fastball, by this point in my life, probably tops out at 15 MPH, my curve is nonexistent, and my knuckle ball doesn’t knuckle, but I can throw strikes, and lots of them.  If the batters hit the ball to my fielders, it just might work.  (I don’t envision many strikeouts…).

If you need a pitcher who has more heart than skill and you could accommodate me on the rare days off when my softball team doesn’t play, I’d be interested in taking the mound, if only once, for one last hurrah.”

Somehow even that didn’t scare them away. They said they’d still welcome me on the team.

But, I still wasn’t sure about playing.

As a result, two days later, last Friday, the first thing we did when I picked up Ethan from college for his Spring Break, was have a catch. I need to see how the old arm felt after a long winter’s respite.

We threw for about fifteen minutes before packing up the car and driving home.

We then threw again on Saturday in the front yard. The first few throws hurt in the way one’s arm always hurts the day after throwing. It’s a good dull pain that I remembered well. Then, the ol’ arm quickly loosened up and I still felt good.

But having a catch isn’t playing baseball.

On Sunday, Ethan and I went to the nicest full-sized baseball field in town so I could throw off the pitcher’s mound. It was cold and windy. It was probably no more than 42 degrees out. Still, I had to throw. I pitched from the wind-up and the stretch. I wasn’t as accurate as I remember being as a kid. I didn’t have much in my arsenal back then, but I could always throw strikes. Thirty four years later, I still didn’t a collection of pitches, but on this, my first time truly trying to pitch in decades, I struggled to find the strike zone. At least at first.

By the end of our throwing session, I was getting better. I kept tweaking my wind-up. I needed to find that old (very old) muscle memory. Sure, I threw batting practice as a coach, and I’ve thrown billions of pitches in backyard Wiffle Ball games, but throwing a baseball off of a mound was something new again.

As Ethan and I walked home, I said, “I’m not encouraged by how I did, but I’m also not discouraged. Maybe it’ll all come around.”

But, even with this, I didn’t commit to the team.

I was just living a pretend fantasy.

Until yesterday when the e-mail from Mr Yates came:

“Dr. Sem, what size uniform shirt do you wear? And what number do you want?”

They really wanted me. I didn’t hesitate to respond.

I asked for uniform #2. That’s always been my number. I flirted with asking for #56 which was Jim Bouton’s* number, but in the end, I had to be true to me.

(*Jim Bouton had a short-lived Major League comeback in 1978 after being out of the big leagues for almost a decade. He then pitched in my area for many years in a semi-pro league lasting well into his late-fifties – always throwing his signature knuckleball.)

I immediately texted my wife and kids.

“I’m going to do it. I just agreed to play on the baseball team.”

Mike Trout may have just signed for over 400 million dollars, but I think I got the best baseball offer this winter. After 34 years, I’m going to be playing baseball again.

If only for one game…

As is my dream of putting on the pinstripes.

(This story is also published on www.startspreadingthenews.blog.)