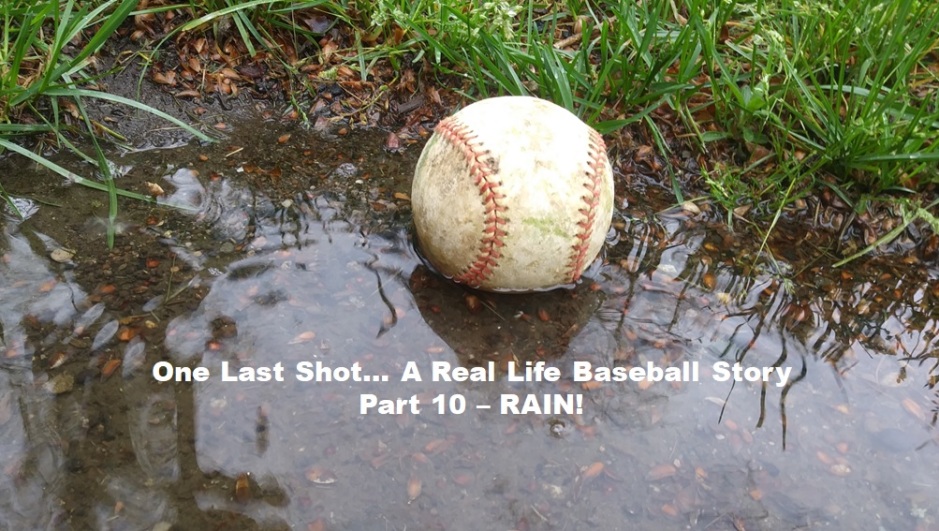 My third start of the season was scheduled for Sunday, May 5.  We were going to be back to Wright’s Field in Bloomfield to play a different team from the area. It seems that a few towns, Bloomfield being one of them, have more than one team in the league. I was looking forward to this opportunity to see if I could build off my modest success the week before.

This would also be my first chance to pitch in back-to-back weeks – a true test of whether or not my arm, and body was up to this challenge.

Rain, dreadful rain, washed away our chances to play.

Once again, my life as a pitcher on a baseball team transitioned to me being just some middle-aged guy throwing baseballs in his backyard. As I have been doing, to try to stay strong, I continued my solitary throwing program with two noteworthy exceptions.

On Tuesday, May 7, I had to stay at the office late since there was a school event in the evening.  Being that I would have some time before the event, I had arranged a throwing session with Coach Yates, who also serves as our catcher.

We met at about 5:30 p.m. which gave me an hour to throw and then change into a suit for the event at the Board of Education offices.  Our plan was to use the baseball diamond behind the school, it would have been good to work off a pitcher’s mound, but the local recreation teams had reserved the field.  Instead, we just found a quiet area near the playground and threw for a good thirty minutes.  It’s true that exercise produces endorphins. People tend to feel better when they are physically active. I am finding this to be especially true when I throw. As I think about my windup and form and throwing a baseball at a target, over and over, the stresses in my life seem to melt away.

There is something special about getting lost in the rhythm of pitching.

Throughout this session, my arm felt good.  I don’t think I was throwing particularly hard, but the ball felt great coming out of my hand. I will say this, the sound the baseball makes when it snaps into a catcher’s glove is also something special.  When a ball hits a catcher’s glove at just the right angle it snaps – loudly. If nothing else, it made me sound like I was throwing fast – even if I wasn’t.  For the most part, I was pretty accurate as well, but there were a few occasions when I am sure Coach wished that there was a backstop behind him, because when I did throw the ball past him, it rolled and rolled…and rolled.

On my next throw day, Thursday, May 9, I had an even more special throwing partner – my Dad.

These essays, of course, document my attempt, as a fifty-year-old middle-aged man, to be a pitcher in a competitive baseball league.  Some people tell me that what I am trying to do is special or unique. That might be true, but what’s even more special, more remarkable, and more unique is that my dad, at eighty-years-old, can still have a catch. More, my dad can still throw and throw well.  My father exercises daily (another trait he passed on to me) and is in great shape. I have to wonder how many men at his age can still throw and catch a baseball. Not many, I am sure.

Take out a baseball or mention having a catch, and my dad instantly becomes forty or fifty years younger. In some ways, a baseball can act as a time machine.

I love throwing with my dad. He was there at the start, of course, teaching me about baseball. He taught me how to throw and catch in my earliest days. It was my dad’s love of baseball that fed and fueled my own. As I grew up, he always made time to play baseball with me. We spent many summer afternoons riding our bikes to Coolidge School in Wyckoff to “bat some balls out.”

There is something very special about playing baseball with one’s father. I’m fortunate, I have a great dad which makes my memories that much more special. I’m also very fortunate that I can still build on these memories even today as a middle-aged man myself.

As we threw, we talked about everything and nothing.  We laughed. We threw. We caught. There was that special timelessness that exists when throwing a ball back and forth. I think we could have thrown forever. In some ways, I wish we had.

My dad is remarkable, even at eighty, he catches everything I throw to him. Even more remarkable is that his throws to me are never off the mark.  Never.  It’s always been that way.  Dad’s throws are always accurate. Always. My father’s throws, can, in some ways, define him as a person: steady, strong, reliable, and consistent.  Fun too. My dad and I always have fun when we toss. Often times we experiment with our supposed trick pitches, although on this occasion, my dad didn’t break out his patented knuckleball.  (I’m sure I’ll see that pitch the next time we throw together.)

My father still has the baseball glove he used as a kid – a Bob Feller model.  He loves that glove, a glove that has played ball with him his entire life.  After he caught one pitch right smack in the center of the glove, where there is absolutely no padding, he said, “Ouch, that hurt.”  He then said, “Maybe I should get the glove re-padded,” but quickly decided against it knowing that while the glove shows its age, it is perfect just the way it is.

As the week was coming to an end, the baseball team talked about having an early morning practice on Mothers’ Day (May 12).  The plan was for us to play a simulated inter-squad game before returning home to resume being great family members and to celebrate the special day with our families.  (We must all have very understanding wives!)

I was looking forward to the opportunity to pitch again. I need to face real hitters so I can work on throwing to spots and figuring out a plan to get each batter out. I’m still very much a novice in all of this.

But, like the previous Sunday, May 12 was also a day of rain.  It began raining overnight and didn’t stop all day.  There was no practice, no game, and no throwing.  My dad brought his glove to our family gathering later that afternoon, but the glove stayed in his car.  The rain never let up.  As I write this on Tuesday night, two full days later, the rain continues to come down. This has been one very rainy period. It has rained so much that the Yankees have been rained out on back-to-back nights.

It’s even kept me from throwing in the backyard.

But, maybe all this rain is actually a good thing. I’m getting many weeks off. This is allowing me to rest my arm between games – and my right Achilles too. I haven’t written a lot about the Achilles, but it hurts – often and always).  I visit my doctor two times a week to have it worked on, and it’s getting better, but progress is slow. I haven’t run in well over a month which is very frustrating for a runner like me.

But again, this time off just be good. It seems like my regular rotation is to pitch one week and then get two weeks off. For a fifty year old guy, that might be an optimal schedule.

I’ll hope to throw in the backyard one or two more times before Sunday, which I hope will be my third start of the season.

If it doesn’t rain.

I’m looking forward to getting back on the mound…

Previous installments of this series can be found on this site or here:

One Last Shot… A Real Life Baseball Story (Part One)