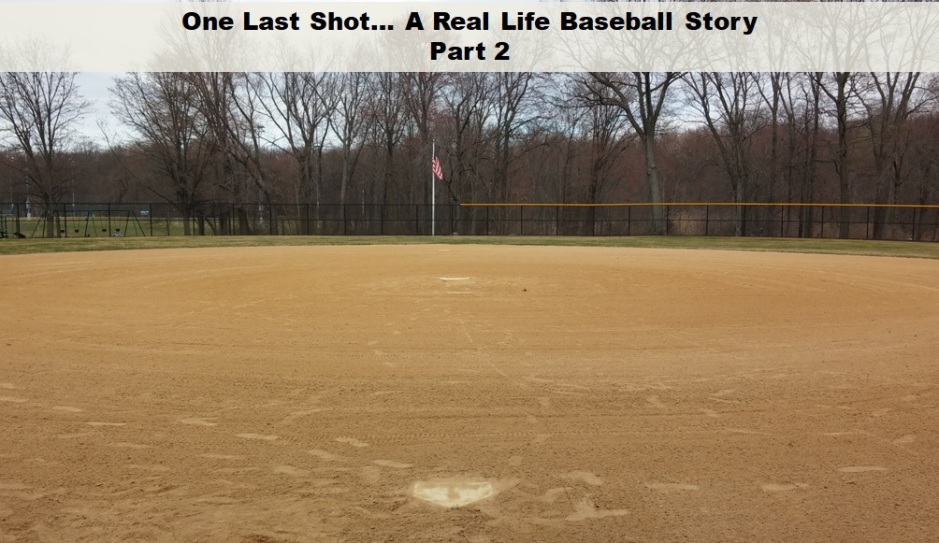 Buoyed by the fact that I had thrown, at least well enough with my son, I let my baseball dreams slowly grow in my mind. Here I was, fifty years old, a fifty year old man, the age long past when most people hang-up their spikes and their gloves, and I was thinking about getting mine back out, and on, and playing baseball once again.

I couldn’t wait to see what I could do.

The extent of my baseball playing had been the few catches I had had with my son Ethan. Our last tossing session left me neither encouraged nor discouraged after throwing off a pitcher’s mound with the intent of really acting like a pitcher for the first time in numerous decades.

March 24 brought with it the first time our baseball team would get together for a practice. I put on my baseball pants, high socks, and a few layers of shirts (it was chilly) and headed out the door.

Because I am me, I arrived early, ahead of the rest, to find the field occupied by a team of players – all children. They were being coached by a few of their dads. Seeing this play out before me, my first feelings as a baseball player made me feel foolish. Quite foolish. I was probably forty or more years older than anyone else in baseball clothes (the kids) and found myself standing alone. I managed to say something to one of the coaches like, “I think a bunch of guys are showing up for an old man’s baseball team soon” and sat on a bench (the place where I spent most of my baseball career anyway) waiting (and hoping) someone from my team would arrive soon.

It was a good ten minutes before I realized that something had gone amiss. I was still alone, feeling more and more out of place by the second, and decided, finally, to head home. My new baseball career seemed to be over, basically, before it started.

As I walked, slowly, to my car, I saw two guys, both mid thirties, dressed for baseball. I asked, “Are you here for the men’s team practice.” They replied in the affirmative. Buoyed by the fact that I’m not a complete idiot, I walked with them back to their field, borrowed a baseball from the team of kids and the three of us had a catch.

The other guys told me that neither of them had thrown a ball in years. One of the team’s coaches, Eric Fluet, then arrived and shared that he, too, hadn’t played in a while. I hadn’t played baseball in years, thirty four to be exact, but since I still play softball, I have at least been active in a similar game. I thought, “I can do this.”

Since the kids had claimed the field, as other players arrived, we ventured into a nearby outdoor batting cage. We swung a bit in there – soft toss. I went first and drilled line-drive after line drive into the netting. I can hit. I can hit well. I just can’t hit if someone is throwing fast. Soft toss? Piece of cake. I mashed. I was an All-Star! (I also knew this was a mirage. For me, soft toss doesn’t translate, at all, to real life hitting.)

After this, we decided to shag flies. I offered to be the fungo hitter and hit nice long towering flies to the other players. This is a skill one never seems to lose. I had coached baseball, after all, for many years. I can self-hit fly balls into the sky by the hour. This, too, is a skill that doesn’t translate to the batter’s box when one is facing a live pitcher.

I finally went out to shag flies and realized that it’s awful difficult to catch a dark baseball hit way up into the sky coming out of a dark background of tall oak trees. I didn’t catch any flies…

The kids eventually wrapped up their session and we ventured to the field. It was starting to get late and I needed to leave soon so I offered to throw batting practice to a few of the guys. In this, I was met with good news and bad news.

Pitching from the wind-up I was able to throw (mostly) strikes. That was the good news. The bad news was there were times when I was trying to throw the ball past the batters and they hit almost every single pitch squarely. My “fastball” didn’t fool anyone. Still, I did throw strikes! And, more importantly, I felt good. REal good.

After pitching, my turn at bat came. The new pitcher threw gas. I was actually scared in the batter’s box – immediately bringing the fears I felt batting as a twelve year old. “Please don’t bean me.” I asked the pitcher to slow down his throws.. He did.

They were still too fast.

With lobbed pitched, I hit a few solid line drives and deep fly balls. If only the game were that easy. (There is a reason why I play slow-pitch men’s softball. I never could hit the fastball.)

A short while later, I called it a day.

When I began this silly adventure, I knew in my heart that I’d never be able to hit. I also knew that I couldn’t field all that well. A baseball is too small and moves too fast. I can still play shortstop in softball, but in baseball, no way.

But I signed on to be a pitcher, and only a pitcher – and I did pitch. The first thing a pitcher needs to do is throw strikes – and I threw strikes.

If I’m going to make it in the league, it’ll be as a pitcher who is DH’d. It’s my only hope, but I knew that going in.

I’m giving this thing a shot!

(This story can also be found on the StartSpreadingTheNews Yankees blog:  One Last Shot… (Part Two) )