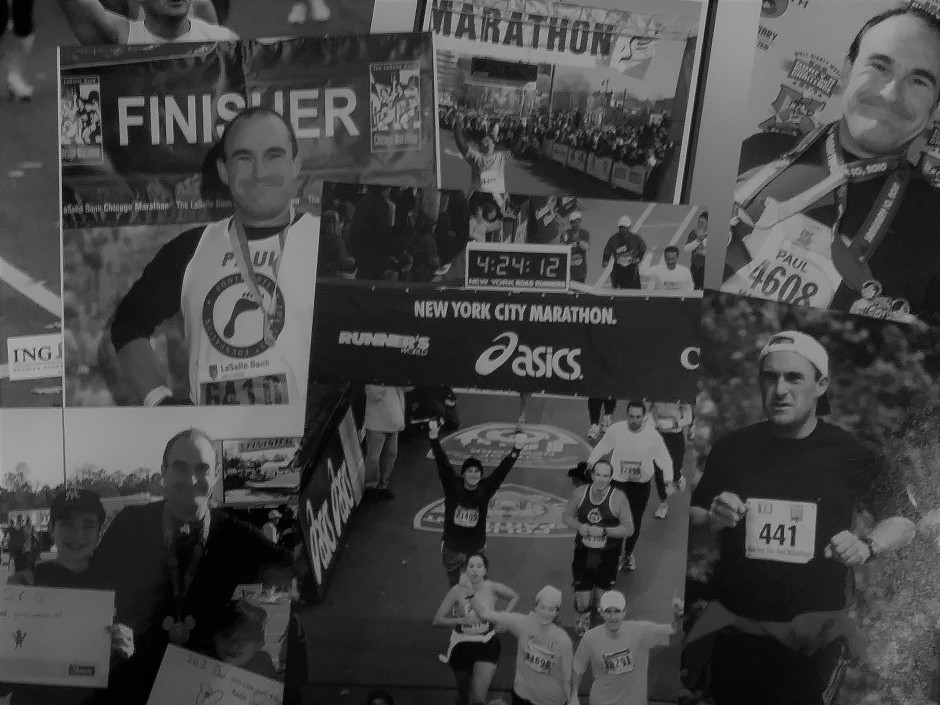 It was a cold, bitterly cold, November morning in 2002.  After many months of training, I sat, shivering, at Fort Wadsworth in Staten Island awaiting the start of the New York City Marathon – my first such race.  The feeling of anticipation and excitement was palpable.  I was eager, and deathly afraid, to begin.  I had never run 26.2 miles – not even in my training.  I didn’t know what would happen to me on the streets of New York…

In short, what happened was that my life was changed.  Radically and forever.  It was on those streets of New York that I became a marathon runner.  I became a champion.  I became a warrior. I became something I hadn’t ever been before.

It was such a wonderful experience that when I think of it all, even now, sixteen years later, my heart swells and I start to cry.  Good tears.  But tears nonetheless.

I knew on that day that marathoning had suddenly become a big part of my life.  From that moment on, and ever since, I have defined myself (at least partially) as a marathoner.

Including that first race, I have now run a total of twenty marathons.  I’ve completed New York (my favorite) six times.  I’ve run most of the big east coast races: Marine Corps, Philadelphia, Baltimore, Disney… and a bunch of smaller ones as well.  A long time ago I set my Personal Record on a cold October day in Chicago (3:26:16).  I am extremely proud of that performance.  I wasn’t quite good enough to qualify for Boston, but I was fast and I’ve never, before or since, run better.  (I don’t tear up when I think of that Chicago race, instead, I just stand a little taller.)

For more than a decade, I was a year-round marathoner.  I’d aim to run at least two races a year – a spring marathon and a fall one.  I’d go from training and running one race right into training for the next.  Forty mile training weeks were the norm for me.  I pushed, I struggled, I ran and ran some more.  I didn’t know the meaning of quit.  A normal month included at least 100 miles of runs.  I did that for years.  I didn’t know what stopping was.  There was always another race, another challenge, another chance to prove something to myself – to prove that I could do it again.

And I did.  Again and again.

Since I put so much into my training, running long distances became somewhat routine for me.  I felt that on any day, if I needed to, I could run forever.  I often did.  (I have to add that none of the runs were easy.  Running is hard.  It hurts.  Always.  I have found every single run I’ve ever embarked on to be a struggle.  While I found it easy to get outside, that isn’t to say that each step wasn’t difficult and that I didn’t face continual pain and doubt.  Oh, I did.  Every time.  Every run hurts.  Every single last run. I just didn’t let the pain or the doubt stop me.

I also believed I could fly.

And I think I did.

I put a lot into my running and got a lot more out of it.

But then, a number of years ago something happened.  It was nothing tragic.  But it did change me.  I got hurt.  And hurt again.  And again.

Every runner knows the injuries: plantar fasciitis, torn Achilles, stress fractures…  Each provided a temporary set-back.  Each slowed me down, a little at a time, and each made my running skills erode, slightly, but not enough to make me notice.  In fact, I just ran ran through most of these injuries.  I felt I was tougher than the injuries – tougher than pain.  I also felt that I could run the hurt away.  (And it worked.  It did.  For a long while.  But not, alas, forever.)

What we put in, we get out.

As I now realize, because of the injuries, I stopped putting as much work.  I thought I was overcoming, but I wasn’t.  Each gain was followed by a set-back.  One injury led to the next.  I couldn’t (and haven’t yet) found the momentum that defined me for so long.

Who am I as a runner?

My last marathon was 2016.  I had to miss all the big races last year and I am struggling to get to marathon shape for this year’s marathon season.  I have blamed some of this on age, I’m leaving my forties, but that’s not entirely it.  The injuries have changed me.

A few weeks ago a friend asked me how I train for the half marathon.  After thinking about it, I realized that I have never trained for a half.  I have run many of them, but I just ran them.  Those runs, those races, just came as part of my bigger marathon training plans.  At times, running 13.1 miles was actually an easier day than I had originally scheduled.  Train for a half?  Why?  A half was a walk in the park.  (Technically, many of these were a run in Central Park, but you get the idea.)

The other day, the first nice warm day since forever, I went out for a run.  Because of a torn Achilles that just won’t get much better, I haven’t run any long distances since last September and I didn’t really do much last summer either.  My longest run since then has been just five miles.  I only did that once.  Most of my runs (on my treadmill) have been for three or fewer miles.  (I’ve become the king of getting to two miles and feeling that it is good enough.) (Who am I – and what have I become?)

Yet, when I went out for what I hoped to be a nice three mile run, I was confident.  I thought I’d find that old rhythm.  I thought I’d be the runner I had always been.  It was only three miles after all.  But I found that I couldn’t make it.  I could barely cover one mile.  I had to stop and walk.  On that run, I never got any momentum.  I stopped running and walked a lot during that three mile stroll.

I wondered what had become of me.

During that “journey” I realized that I had finally become a different runner.  Going out and covering three miles was never a challenge before, or at least, being able to cover that distance was never in doubt.  It is now.

Frustrated, disappointed, angry…I realized that my struggle was a direct result of my actions.  You get out what you put in.  Because of the injuries, and the doubt that they bring with them, I haven’t put in enough real miles to prepare my body for a nice run – of any real distance.  I had, long ago, wasted away all those miles I had saved in the bank.  My account is empty.

I am a bankrupt runner.

I have lied to myself a lot these last few years.  A lot.  Time and again, I have told myself that I’m fully healed.  I’m not.  At this point, I don’t know if I ever will be.  My Achilles hurts almost all of time.

For a long time, I haven’t run with any confidence.  I run scared.  I run wondering what muscle or tendon I’m going to strain or tear or finally ruin.  I find it easy to find excuses to stop.

I am signed up for a marathon for September.  It’s coming too quickly.  The NYC Marathon comes just two months later.  Time is passing fast.  Too fast.

I need to become the runner I used to be.

I’ll never be as fast as I once was and there was a time when I thought I could run through anything.  And I could.  And I did.

I need to again.

I need to get outside and cover the miles step-by-step and day-after-day.  I need to be the runner I used to be.

I’ll only get there by putting in the real effort once again.

We get out comes from what we put in.