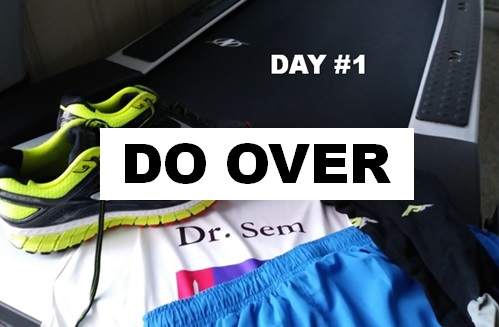 I was still injured.

I just didn’t want to admit it.

I figured that I’d take it slowly and that I’d build up the mileage over time.  The plan did make sense.  It really did.  Except for one fact, I was still injured.  I had torn my Achilles a while back.  (I really don’t know when.  Pain has been a part of my running for a long time now.  I probably tweaked the tendon and just ran and ran on it making it worse and worse.  Who knows?)

I ran one mile on that November day and felt good enough.  Two days later, I ran one mile again.  The next day, I ran two.  (For a marathoner, like me, this is taking it VERY slowly.)

I then needed four days off before running two miles on back-to-back days (November 18 and 19).  This was slow, but steady progress.  After three more days off, I covered my first three miler.  Two days later, I did back-to-back days of two miles again.

I was being smart.  I stretched.  I took a lot of off days.  I didn’t run fast.  Moderation was the key.

But I was still injured.  After a one mile run on November 29, I shut it down again.

In between runs, I was hobbling all over the place.

Today, two and a half weeks after I stopped, I just ran one mile.  I’m now icing my Achilles.  But… it doesn’t hurt.  I visited my great chiropractor/sports injury doctor (Dr. Alfonse DeMaria) four times in the last few weeks.  He is a miracle worker.  I had felt pretty good for almost a week, so I figured I’d try one mile today and see what happens.

So far, all seems good.

The first step of my (new) comeback seems successful.

I just hope this isn’t another false start.