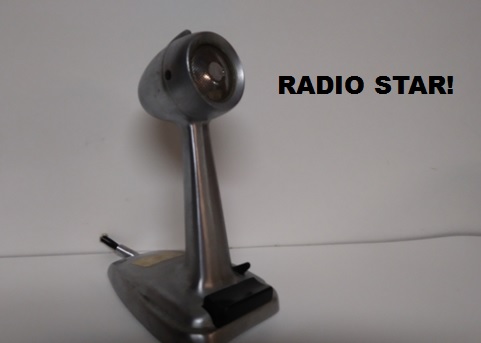 I was a sophomore in high school, I believe.  I had just alerted my parents that I needed to head back to the school that night to broadcast the school’s JV and Varsity basketball games on TV that night.  I remember my mother, shocked, almost to speechlessness, uttering, “You’re going to do what?”

“I’m going to announce the basketball games on live TV,” I responded.

My mother had no doubt that I would be able to announce a game.  She had listened to me announcing baseball games, real and imaginary, since I first started following the game.  My voice was the voice of my childhood.

When I played my imaginary baseball games in the basement by throwing the ball against the wall, I also served as the play-by-play announcer.

When I played the table-top baseball game known as Strat-o-Matic, I announced the games.

When I played Wiffle Ball against my friends, I announced the games.

Actually I announced every type of game I played.

“Semendinger is about to roll.  You know what he’s thinking.  If he can get a seven, he’ll have Boardwalk and the game’s first monopoly.  Here’s the toss, and the reading of the dice…a four and… a three.  That’s a seven.  THAT’S A SEVEN!  Semendinger moves the race car to Boardwalk!”

(Looking back, it’s a wonder anyone even played with me.)

And, yes, along with Bill White, Frank Messer, and Phil Rizzuto, I also announced the Yankees games that were on TV to the audience in my living room.

So, to my mother, it wasn’t a surprise that I was about to announce a sport for people all over to listen to.  What shocked her was the fact that I didn’t play basketball, I didn’t watch basketball, and I didn’t really know anything about basketball.

And I did.  I was the voice of Midland Park High School basketball (Boys’ and Girls’) for three years.  And people told me that I was good.  (I think this impressed my future In-Laws.  They sometimes watched their daughter’s high school boyfriend on TV.)

It’s amazing when I think back on all this.  As a kid, I was broadcasting sports on live TV.

I knew where my future was heading.  There was no doubt that a lifetime in the broadcasting industry was in my future.

But life and other aspirations sometimes get in the way.

A different calling called me.  A different direction beckoned that led me away from microphones and into classrooms to work with kids.

Sometimes I wonder what could or would have been… but I’ve never regretted becoming a teacher and a principal.

A few years ago there was a small college radio program at my old alma mater (King’s College in Wilkes-Barre, Pennsylvania) that was struggling.  That program, The Radio Home Visitor, shares local news with the elderly and home-bound.  The program is an essential service for a large community of people, but it was teetering on its last legs.

John, my old college roommate (and, yes, the illustrator of the Principal Sam books) worked with the Radio Home Visitor, even after graduation.  He stayed connected to the program for decades.  And then one day he said, “We might have to shut the Radio Home Visitor down.  We don’t have enough readers to produce a daily program…”

That’s when I threw my hat into the ring.  “I can read stuff,” I said.

Within a few days, I was reading local articles for the Radio Home Visitor from my basement.  I’d record them on an iPad and then e-mail them to John in Pennsylvania.  A few hours later, through the miracle of technology, thousands in the Wyoming Valley were hearing my voice.

Over time, my role transitioned from a reader of local news to becoming the guy who read a daily health column.

I enjoy this work.  I have learned a great deal about various illnesses, procedures, maladies, and conditions.  When I read, I get to sound like I know what I am talking about, even if I don’t.  (In this regard, I am actually no different than many other people you hear on the TV or radio.)

But just reading the local news and the heath reports wasn’t quite enough for me so I asked if I could do something a little different.  I asked if I could read something spiritual each day.  It was through this that my daily, “Words of Inspiration” became a reality.  Each day I find a spiritual piece that I read for the Radio Home Visitor audience.

I live in New Jersey about two hours from the Wyoming Valley, yet each day thousands of people in Pennsylvania hear my voice sharing an uplifting (and most often religious) message.

Each day I hope and believe that people’s lives are made brighter, or a little better when they hear me say, “And here are today’s words of inspiration…”

A long time ago when I’d imagine myself talking on the airwaves, I pictured being in a large studio behind a big microphone with lots of dials and buttons and cool technology.  I knew I’d be on the air in a big city.  I figured that I’d sometimes be spinning records, sometimes doing the news, but that most often I’d be announcing sports.  I figured that one day I’d be the voice of the Yankees or Yankee Stadium.  (There is still time for this…)

But, in reality, while I am on the radio, there is no big studio.  There are no dials or contraptions.  I don’t go into New York City.  I don’t rub elbows with the other on-air talent.  No, instead, I just sit in my basement in a quiet room with a cheap microphone headset and an iPad.  I hit record and I start talking…  That’s the extent of it.  It’s as low budget as it comes.

But I am on the radio.  It’s not what I thought I be doing, or how I’d be doing it, but I am living out a dream.

But none of that is what I’m really writing about.  More than all of that, I have been thinking a lot about the “words of inspiration…”  Maybe I think too much about this, but the other day, when I stopped to really consider what I was doing, I had to pause.

I read those words alone in my basement, but they are then passed on to others who ponder and reflect and wonder and question.  I know that I’ll never know how many lives I’m really touching, but I know (and sometimes there are things that we just know) that I am touching some.

This is what we call “paying it forward.”

People I will never meet, people I never know, listen to my voice…

Each day, from the comfort of my home, I read words that might be changing lives.  I’ll never truly know.

This makes me feel very good.  It’s good to help others.  In fact, it’s great.  But then one day, it really was just the other day, I realized that all of these readings – the health stories and the “Words of Inspiration,” they weren’t necessarily just helping others – they were helping me.

I was reminded of an essential truth.

It is a little awe inspiring to think that people hundreds of miles away hear my voice and relate it to inspirational messages.  But they do.  They must.  Each day, in a very small way, I’m helping people who I’ll never know.  Each day, I say words that just might change someone’s life.  Each day, I’m helping someone just be reading a few words into a microphone.

But by doing this, I’m really helping myself.

That’s not why I do these things, but it sure is a terrific side effect.

One thought on “Radio Star (The Impact of Our Words)”