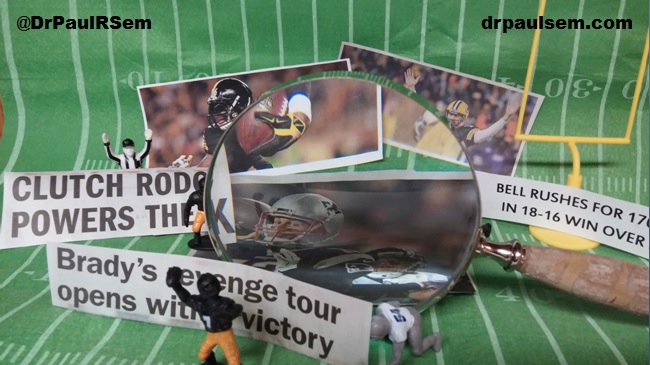 This is NFL Playoff Weekend.  There are two big games coming up on Sunday.  The winners of each of the games will go to the Super Bowl in two weeks.  I am a casual football fan, but I am excited about the playoff games this weekend.  They promise to be exciting…

(If you click on the highlighted words before each section, you’ll have even more fun with this blog post.)

Three* of the most dynamic NFL players will be appearing in the games this weekend.

(*I could write about more players but then this piece would take so long to read that you might actually miss the games.)

These three players are:

Tom Brady (New England Patriots) – Some people consider Tom Brady to be the greatest quarterback of all-time.  He is among the all-time leader in many statistical categories.  He has been to 12 Pro-Bowls.  His team always seems to reach the playoffs.  In fact, Tom Brady has played in more playoff games than any player in football history.  Brady has been in six Super Bowls and has won four of them.  (The only quarterback to best Tom Brady in the Super Bowl was Eli Manning – who did it twice!.  Of note, Brady also lost three AFC Championship games to teams quarterbacked by Eli’s brother, Peyton Manning.  If not for the Manning family, Tom Brady could have possibly won five other Super Bowls!)

Le’Veon Bell (Pittsburgh Steelers) – Le’Veon is considered to be one of the best running backs in the NFL today.  He has a dynamic style that allows him to run out of the backfield with grace and skill that befuddles his opponents.  Bell is also a gifted receiver and is used in that manner which makes him a double threat.  In his three professional seasons, Le’Veon Bell has already been to two Pro Bowls. He was among the league leaders in rushing yards and total yards (rushing and receiving) in 2016.

More than any of that, Le’Veon Bell has a unique running style- sort of a run, stop, run, stop, run approach, that is unlike any other runner in the NFL (or in NFL history).

Here’s a quick overview of Le’Veon Bell and his unique running style: https://www.youtube.com/watch?v=QQL0CdUTQIE

Aaron Rodgers (Green Bay Packers) – If he’s not the greatest quarterback of all-time, Aaron Rodgers might be the most magical.  There may never have been a player in the history of any sport that has completed more impossible and amazing plays than Aaron Rodgers.  Furthermore, these plays seem to happen at least once in every game he plays – sometimes, often times, more.  Viewers watching Rodgers just wonder aloud, “How did he do that?”  Rodgers completes passes that everyone who has ever played any version of football, even two-on-two in the backyard know can’t possibly work, yet they do – for Rodgers at least – time after time after time again.  The great Tom Brady (see above) said this week that Aaron Rodgers does things as a quarterback that even he can’t.  High praise, indeed.

Rodgers also has a reputation as the smartest quarterback in the NFL.  He always seems to know the rules before anyone else (sometimes even the referees) and calls plays that catch the other team off-balance.  These lead to opportunities for the Packers that other teams just don’t get.

In addition to being a magician and a football intellect, Rodgers has put up a career of impressive numbers.  He has been to six Pro-Bowls, has won two Most Valuable Player Awards, and one Super Bowl.  Each year Rodgers continues to climb the all-time lists in important categories such as passing yards and touchdowns.  But, again, more than any of that, the man is a magician.

These three players, and their teams, of course, are each one win away from going to the Super Bowl.  They are the best of the best.

What can we learn from them?  (I’d tell you, but the clock just ran out and it is halftime…)

Let’s now look at just one or two character traits from each of these players as noted in the videos above and how they relate to our world at Hawes:

This is a key to a highly successful organization – the fact that the best people on the team work diligently to make those around them better.  It’s important to be one’s best.  That’s great.  What is even greater is when teammates bring the skills, passion, and vision that makes those around them better.  That is true collaboration and it defines the highest goal of any organization.  The very best organizations have employees that bring out the best in each other.  In organizations like this, people turn to each other and say, “How can I help you?”

Successful people also know when they need to ask for help.  They seek others who have skills, abilities, perspectives, and talents that they can utilize to solve their own challenges, road blocks, and frustrations.

It’s great to give help.  It’s also great to ask for help.  None of us can do it alone.

We need to always set the highest standards for ourselves, we need to work, each day, to be our best, and in addition to this, we need to continually develop the collaborative environment that allows for others to ask for and to give assistance in a non-judgmental fashion.  That is how we become transformationally great.

In work, we need to maintain our own childlike enthusiasms.  This is true for any line of work, but it is especially true in schools.  As teachers, we must bring that sense of wonder that is unique to children to our classes.  We must smile.  We must make learning fun.  Children take their lead from us.  They learn facts, they learn information, but they also learn about enthusiasm and passion by seeing us loving what we do.

We need to always be the adults, but when we remember to bring child-like enthusiasm to our tasks, we bring out the joy and the magic and the wonder that is at the heart of what elementary education is all about.

Le’Veon Bell –   “You see his work ethic, his energy, and his passion that he puts into his game.”

Success doesn’t come to people who are unwilling to work for it.  In fact, it only comes to those who give their greatest energies to assure its arrival.

If Le’Veon Bell is great, at least some of that greatness must be attributed to his work ethic.  If Le’Veon Bell is going to become an all-time superstar and achieve the highest levels of play over a long career in the NFL, he’s going to have to maintain that energy, passion, and work ethic.  Nothing great happens without enthusiasm.  No one becomes legendary without putting in the necessary time to achieve that level of success.

As teachers, we must model the same strong work ethic, the same energy, and the same passion.  Kids need to see us as exemplars in those areas.  Children learn by what they see.  In addition to us being our very best selves, even more importantly, what we need to do is teach students to have these passions.  In order for them to become successful in life, they will have to work at it.  That is one of the key lessons children must learn – that success comes only through hard work.

When kids see how hard our jobs can be, and how much we work at them, they learn to appreciate and understand the value of hard work.

In short, Aaron Rodgers has the confidence that comes from excellent preparation and an optimistic mindset.  There may be no better argument for a positive mindset than the Aaron Rodgers video linked above.  When he throws those passes, he’s not saying, “I know this won’t work.”  He’s not even saying, “I hope this works.”  He’s throwing the ball with the power of his convictions saying, “I know this will work!  We’re going to win the game.”  And darn if it doesn’t happen again and again and again.

There is another part of this as well – success begets success.  When we allow kids to excel, they get even better.  When we create the right environment for success, children become successful.  When we believe in them, they start to believe in themselves.  Once they truly believe, they can achieve things beyond our (and their) wildest imaginations.

We throw touchdowns when kids who never succeeded before start to achieve at their own highest levels.

All four playoff teams reached the finals with different approaches and different skill sets.  Often times in education we try to state that there is only one way to approach a lesson.  “You must teach this way” we are sometimes told.

Le’Veon Bell has developed a style of running that is completely different than any running back before him.  In doing this, he has established a style unlike any other.  Even more, because he is successful, his approach is bound to be emulated and copied.  I guarantee there will be an influx of runners who now run the Le’Veon Bell way.  A new paradigm has been created.  Defenses will also change to adapt to this new style.  This is good for the game.  Because of innovations like this, the game of football is always changing.  This helps to make the game vibrant and interesting.

I have to wonder, if Le’Veon Bell was told to run only one specific way if he would even be successful in the NFL today.  The common knowledge, the accepted wisdom of how to approach his position didn’t work for him.  Instead, he found a new way.  During last week’s game, the announcers said that it was only Mike Tomlin, the Steelers’ coach, who recognized the brilliance and wonder of Bell’s approach.  Too many other experts were blinded by what they couldn’t see.  “That style won’t work in the NFL,” they thought.  They were wrong.

Every person who has ever made an advancement looked at a situation and said, “Maybe there’s a better way.”

We must always look to better ways.  It’s how we improve and it’s how our schools and organizations improve.

Now, don’t misunderstand.  There are best practices, there are protocols, there are expectations that make sense.  Aaron Rodgers wouldn’t have the opportunities to make game winning drives and throw passes across fields to his receivers if he didn’t have an offensive line that follows the rules, procedures, and expectations for protecting the quarterback.  There is a job they have to do, and they do it extremely well.

We need to always keep our mind open to new possibilities and new approaches.  “That’s the way it is” doesn’t work because while some are following the accepted protocol, others are inventing the new and greatest paradigms…

In the end, when we are committed, when we bring passion, when we work hard, when we see the world with childlike eyes, and when we consider opportunities and new approaches…

and when we believe in miracles… we put ourselves in the best position to have the greatest learning environments and greatest organizations possible.

When we do these things, we become every day life Super Bowl champions.