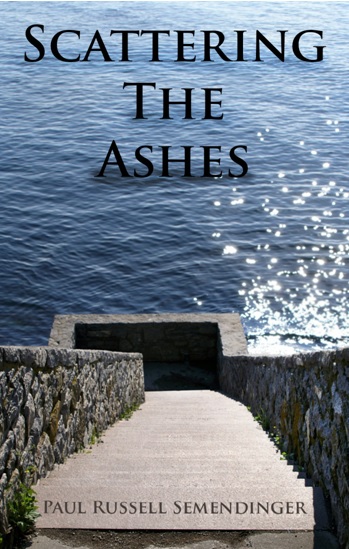 My first novel, Scattering The Ashes, will be published on October 22, 2019 by Artemesia Publishing and is now available for Pre-Order here.

This novel tells the fictional story of Sam Holmes as he struggles though the aftermath of losing his father and having the responsibility and obligation of fulfilling his late father’s final request.

Readers will become attached to Sam Holmes as he seeks to find himself in this trying period of his life. Initial reviews of the novel have been very positive.

Baseball is one (of many) themes that forms the framework of the story. Throughout this year, leading up to the book’s release, I will share excerpts from the novel here on these pages and on my Yankees site: www.startspreadingthenews.blog.

The following is an except from Chapter 5. In this scene, early in the novel before his father passes, Sam Homes awakes in pain the morning after his longest training run as he is preparing for his first marathon – the New York City Marathon. He is feeling doubtful about his abilities as a runner. Soon the prospect of a fictional encounter with two former baseball stars changes his outlook on the day…

(From Scattering The Ashes (2019, by Dr. Paul Semendinger, with permission from Artemesia Publishing)

The next morning, after I swung my legs out of bed, I realized I could barely stand.  The plantar fasciitis in my foot screamed with pain every time I put even a tiny bit of weight on it.  I had never felt such pain.  Have you ever stuck hot needles into the bottom of your foot?  I haven’t either, but it sure felt like I had.  In addition to this foot agony, everything else, especially the fronts of my thighs, seemed to ache.  I wondered if I had pushed my body further than it was able to handle.  Was twelve miles my limit?  Maybe I wasn’t built for a marathon.  Dr. Alfonzo, my chiropractor (who is also a miracle healer), advised me to always stretch before a hard run and also to always ice this injury after the effort.  Why didn’t I listen to his advice yesterday?

I hobbled outside to get the Sunday morning paper.  The sun was very low in the sky, and my house cast a long shadow over the lawn and our neighbor’s driveway.  The trees in the neighborhood, as well as the hills, blocked the daily sunrise which I felt a sudden longing for.  Standing on one leg so as to lessen the pain, I thought of my kayak and the bay.  I imagined that the cool early morning water would be an elixir on my throbbing foot.  But I gathered the paper with a sigh and instead limped inside to my kitchen table where I tied a bag of frozen peas and carrots around my throbbing foot.  I turned to the sports section and began to read the scores before pouring myself any cereal.  The Yankees had won the previous night.  That pleased me.  My days always begin better when the Yankees are victorious.

A small advertisement captured my eye.  The Police Benevolent Association of Norwood, New Jersey, was hosting a “Trip Back in Time” for baseball fans that day.  Former New York Yankee Ron Blomberg and former Red Sox pitcher Luis Tiant were going to be in town hosting a clinic, meeting fans, and signing autographs.

I immediately called my dad.

“Heee-low.” (My father had a unique way of answering the phone.)

“Hang out with Luis Tiant.”

“He’s going to be in Norwood, with Ron Blomberg too.”

I was at the Christian Health Care Center within thirty minutes.  My dad, wearing a weathered Red Sox jersey, was waiting outside the front door.  Tucked under his left arm was his old Bob Feller baseball glove and a baseball.  He looked at me, smiled, and said, “You never know.  Maybe they’d like to have a catch.”

On the ride to Norwood, a good forty minutes away (residents of Northern New Jersey know that there is absolutely no easy way to get from Wyckoff to Norwood.) my father was very talkative.  As we passed through the tree-lined streets and small business districts, we discussed topics ranging from baseball to politics.

Much to my chagrin, we also discussed my lack of a love life.

“What ever happened to Carissa?” (“That was seventh grade, Dad.”)

“How about that girl with the boy’s name…Bobbie?” (“She is married.”)

“You know there is that nurse at my place, Mary.  She’s good looking.” (My dad was right about this, but, “Dad, I am not dating a nurse at your place.”)

The event wouldn’t be starting until 1:30 p.m. so we stopped for lunch at Callahan’s Hot Dogs along the way.  Dad had a plain hot dog (“Just the meat and the bread”), mine came all-the-way.  We shared an order of fries.  Before I could stop him, my dad smothered the fries with salt and ketchup.  Sitting on the plastic chairs at the plastic table, we were in a period I could call “any time.”  It was certainly today, but those tables and chairs looked like they could be the same ones from when this small joint opened in the 1940s.

“I like places like this,” Dad said. “It reminds me of when I was a kid and getting a dog was always a big deal.”

In spite of the distance and lack of a direct route and the lunch stop, we arrived in Norwood a good fifty minutes early.  As I pulled my old Dodge into the gravel parking lot by Municipal Field, we saw two unmistakable figures talking alone.  My dad opened the car door even before I came to a complete stop and nearly fell to the ground in his haste to get to the players.  He rushed up to them as fast as his old legs could carry him.

The players turned to see this old man approaching, glove in hand, as if he were fifty or sixty years younger.  Luis Tiant spoke first, “Hello, Mister.  Thanks for coming to see us.”

I couldn’t believe what came out of my father’s mouth.

“Wanna have a catch?”

The love of something special, like baseball, can create magic.  Both Ron Blomberg and Luis Tiant broke into huge smiles.  They looked around and saw that we were the only ones there.  Ron said, “Yes!”

For the next fifteen or twenty minutes I sat back and enjoyed watching two former Major League All-Stars playing catch with my father.  At times I think I had as much fun as my dad, but maybe that wasn’t possible.  Luis Tiant nearly fell over laughing when my dad threw his signature knuckleball.  In his Cuban accent, Tiant called out, “Old Man, you could peeetch in the Big Leagues.”  I am certain my father still believed that was true.

The magic ended when other participants started arriving.  Blomberg shook my dad’s hand, and my dad embraced Tiant, the former Red Sox.  As they broke their hug, he grabbed Tiant’s hand, looked him squarely in the eye and said, “We almost did it in 1975.  I thought you guys were going to win it.  Oh how my heart broke when you lost the World Series.”

“Mine too,” replied the All-Star pitcher.

(Scattering The Ashes, will be published on October 22, 2019 by Artemesia Publishing and is now available for Pre-Order here.)