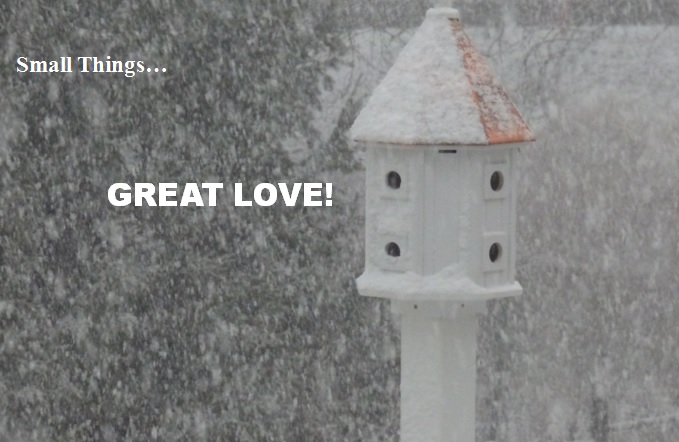 But, many times we don’t know the answers.

And, often times the people we think we are telling the answers to actually have better knowledge than we do.

I’m just glad that sometimes (certainly not always), sometimes, I have the good sense to actually listen to those whom I am trying to teach.

Last Saturday was one of those instances…

Last Saturday I was the featured speaker at a Women’s Retreat held at my church.  The focus on my talk was (of course) on God and Jesus.  The title of my presentation was “Small Things…GREAT LOVE!”

In my presentation, I shared my thoughts on the little things we can do to help make the world a better place – one person at a time.

I am told that my presentation was well received, that my words resonated, and that I gave the participants a good deal to think about and reflect upon.  I’m always pleased when I do a good job and it seems I did a good job.  As such, I’m pleased.

When I woke up last Saturday morning, I was cold and tired.  I still didn’t feel 100%. after being very sick earlier in the week.  I had been at Dads’ Night (a school program that I love) late the night before and would be heading for Round 2 of Dads’ Night later that day.  Did I say I was tired?  And I was cold.  I was cold because lost power on Wednesday during the snow storm and it still hadn’t come back.  Up the street from us was a downed power line.  A huge tree had fallen on it.  The tree blocked the road.  We had a number of blocked roads.  Even though it was days later, nothing had been done to the tree or the lines or our power or the roads.  It was a mess.  A cold mess.

The evening before, just before Dads’ Night, I rushed all over the place after school to borrow a generator from a friend and, once back home, to have a different friend hook it up for me.  (Note – I can do many things, but you never want me handling machinery or opening up electrical panels.)

Ethan had just gotten home from college.  This is what he had the pleasure to be part of.  Dad rushing, mom cold, and the frenetic movements of people trying to get some heat into the Semendinger house.

When I awoke that Saturday morning, the generator had stopped.  That was by design, we didn’t want it running all night while we slept.  It had warmed the house, so we knew we’d be fine while sleeping.  Since I was the first one up, as I always am, it was my job to turn it back on.

I went outside to the generator with a large five-gallon gas container.  (You know where this is going.)  These new gas containers take a level of coordination and skill to effectively pour.  I don’t have those skills or that coordination.  I eventually filled the tank, but I spilled a lot of gas on the ground, on the generator, and, well, I smelled like the Exxon station.

I finally realized I needed to engage the choke.

(Should I admit here that I still don’t know what a choke does?  I know they are on every piece of heavy machinery.  I engage chokes on generators, lawn mowers, snow blowers, and other assorted things, but I don’t know what the choke is or what it does or why I’m getting engaged with it.

When I was in high school and kids would get new (used) cars, we’d all look at the engines.  “8 cylinders, nice,” one kid might say.  “Ohhh, a straight six, cool!”  I looked on with the rest of them but had no idea what they were talking about.  I was just proud that I knew where the gasoline went.

I also have to admit that each time I lifted the hood of my car, I wasn’t quite sure how I did it and I was always frightened that I wouldn’t be able to get the hood down again.

I still have those questions.)

Finally, the machine turned on and I was able to go back inside to the slowly warming house and review my presentation one last time before desperately trying to rid myself of the gas smell and then get dressed.

As I drove to the church, I passed the downed wires and branches and saw that overnight nothing had been done.  The disaster scene from days before hadn’t been touched.  It would be more days, I figured, before we’d have power.

I wasn’t very happy with the town or the electric company at that moment.

And then, there I was, presenting, sharing, smiling, doing my thing, and talking about good things like love and kindness and being thankful.

(Somehow I didn’t smell too badly of gas.)

After the presentation, we all gathered in a circle to talk about my message and the ways we can love each other.  People were discussing the themes I presented.  It was a good feeling.  One person said, “I appreciate how you talked about being thankful.”  She then said, “We should be thankful for those people working on the electric all over the county.”

My brain stopped.  Literally, it stopped.  The words this lady were saying made no sense to me.  Be thankful… for WHO?  It was as if she was speaking in a foreign tongue.

BE THANFUL FOR WHOM?  Who was she kidding?

At that moment, I wanted to (kindly) offer to have that person smell my hands.  In spite of gallons of soap, shampoo, conditioner, mouthwash (I was trying everything), Comet, Brillo Pads, cologne, perfume, and whatever else I could get my hands on that had a pleasant smell, my hands still had that familiar odor – as if I were the guy who fills up your car.

I started to think of all the people I was thankful for.  There were many.

At that moment, I even felt thankful for the gas station guy.  At least he was working.  He was the person who put the gas in the can that I leaked all over the place earlier that morning.  I’d have no heat at home without him.

EXCEPT those electric guys and tree guys who were keeping me in the cold and the dark and smelling of gasoline.

So, I nodded and grumbled some words to the affirmative.  The day continued.

At the lunch break, I needed to depart.  Dads’ Night was calling.

On my ride home, I noticed a lonely car sitting at the top of my street.  There were cones on either side of this car.  Its blinkers were on.  The car was parked right by the downed lines and all the tree limbs all over the ground.

And there was a man sitting in the car, all alone.

I stopped right next to the driver and put down my window.

He looked at me and (reluctantly) put down his window.  He braced himself for the onslaught.

I smiled.  (I had learned something by listening to others.)  I said, “Hey, I just want to say thank you.  I’m sure people keep asking you when their power is coming on and giving you a hard time.  That can’t be fun.  I know you guys are working on it.  We all appreciate it.  Thanks for helping us and for keeping the people here safe.”

He smiled.  I don’t think he knew what to say.

I then drove away feeling better about myself and the overall situation.

Often times the people we are telling the answers to actually have better answers than we do.

I’m just glad that sometimes I have the good sense to actually listen to those whom I am trying to teach.