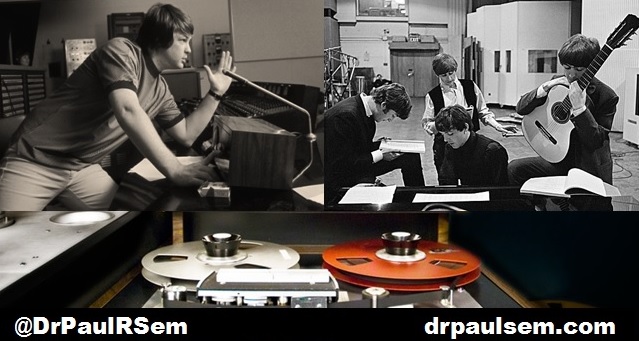 (If you missed Part I of this series, you may wish to go back and read it.  This passage builds off a central theme of that first piece.)

Sometimes when we hear the exploits or passions of people or groups that are highly successful we think, “That’s great, but that can’t be me.”  We often tend to downplay our own impact on others.  We doubt our abilities to make a positive difference.

And, bluntly, sometimes that is easier.  It is much easier to say, “I can’t” than to go out and try to change the world, or if not the world, something in your own life.  Often times, we look at the roadblocks, real or perceived, that will prevent us from working towards a worthy goal.

In the previous passage, we examined how the creative competition between the Beach Boys and the Beatles led them to create some of the greatest rock-and-roll albums of all-time.  As a summary of that piece, I think it’s fair to say that if the Beatles didn’t record Rubber Soul then the Beach Boys would never have recorded their masterpiece album, Pet Sounds.  It’s also fair to say that without Pet Sounds, there would have never been a Sgt. Pepper’s Lonely Heart Club Band.  Each of these albums grew out of each band’s desire to be the very best.  Each band provided the creative energy and the creative competition to try to “one better” their rival.  Each creative step forward pushed the bands to reach heights previously unimagined.  It’s an inspiring story.

This creative competition helped create legendary ground-breaking albums.  The Beatles made the Beach Boys a better band, and the Beach Boys reciprocated in turn.  The significance of this cannot be over stated.  When we truly invest in our practice, when we truly desire to be the best, we become better than we ever thought possible.  And our success, in turn, helps make other people better.

But, there is more to the story…

What we need to examine is the individual impact of just two musicians, Brian Wilson (of the Beach Boys) and Paul McCartney (of the Beatles).  Without those two individuals, the story of those albums and that creative genius never takes place.

Without Brian Wilson, there is no Pet Sounds.

Without Paul McCartney, there is no Sgt. Pepper.

You see, as the story goes, it was not the Beach Boys as a band that listened to Rubber Soul and were inspired to create something even better, it was a singular individual – band member Brian Wilson.  Brian Wilson was the creative force behind Pet Sounds.  That album was his vision – a vision he shared with his band.  It was because of his passion, that the other members of the group were inspired to challenge themselves.

Similarly, there is no record that George Harrison, Ringo Starr, or John Lennon of the Beatles were especially moved after hearing Pet Sounds, rather, it was the fourth member of that band, Paul McCartney, who first set out, and then inspired his band members, to create something new and even more groundbreaking.

It was Brian Wilson and Paul McCartney, as individuals, who created the force and the motivation to set out and achieve even higher levels of greatness.

They had the vision.  They took the risks.  They inspired their colleagues.

That is the power of the individual.

All it takes to make a positive change in any organization, and in any situation, is one person.  One person with the courage to say, “Let’s be better,” or “I have an idea,” can spark the next great exciting process.  One person can be the catalyst that ignites a staff or an entire organization.

The lesson here, and it’s a powerful one, is that individuals can and do make a difference.  The history of rock-and-roll, and modern music in general, was influenced not just by the bands, but by singular individuals who used their dreams and visions to push others forward.

The important fact to remember is that it is your enthusiasm for a project, your ideas, and your positivity that can make the difference.  You might be the spark that propels your business forward in ways no one ever thought possible.

It’s a powerful thought to consider. There don’t have to be roadblocks.

It all begins with you.

2 thoughts on “The Power of the Individual”