Ever since my son Ryan had the same thought I did for an activity during our visit to see him in Georgia (“Three miles up, three miles down…”), I had been thinking of running Currahee Mountain.

Currahee Mountain is the (extremely) large hill that was used as a (very difficult) physical fitness activity at Camp Toccoa during the early stages of paratrooper training during World War II.  The stories of the training, and the success of the troops, has been immortalized in the book and HBO miniseries Band of Brothers which tells the story of Easy Company from the 506th Regiment of the 101st Airborne.

I have always been inspired by tales of leadership, bravery, courage, selflessness, dedication, teamwork, and great effort.   The stories of the Band of Brothers spoke to me from the moment I watched the first episode.  These paratroopers were involved in D-Day, Operation Market Garden, the Battle of the Bulge, and in many other operations in Europe during World War II.

I have since read the original book (numerous times) and also many follow-up accounts from the actual participants.  I am inspired each time I read about these heroes. 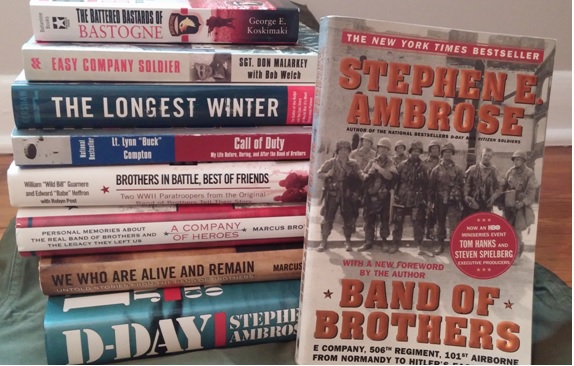 I have also shared my love of this story with each of my three sons.  I watched the miniseries with each of them, relishing in the tales that remind me what it is like to give of oneself and to inspire others to do the same.  I believe a lot of those traits resonated with my sons. They love the series and the book as much as I do (or, at least almost as much).

Thinking about running Currahee though gave me pause.  For a variety of reasons, 2018 hasn’t been my best year physically.  But the thought of taking on this challenge with two of my sons provided me with some needed motivation.  (My one son, Alex, has been doing important math research at Williams College this summer.  He wasn’t able to make this trip.)

During many of my training runs, both outside and on my treadmill, I listened to the Band of Brothers soundtrack.  I have also been re-watching the entire miniseries with my youngest son Ethan.  It’s been great to spend this time together as he’ll be leaving for his first year of college soon. (Why can’t our kids just stay young forever?)

The training and preparation made the month of July pass quickly.

And then, before we knew it, we were in Georgia, visiting Ryan…and heading off to Toccoa, Georgia where the old military base had once been and where Currahee Mountain still stands.

Upon arriving at the location, we found a gate that seems to have been recently constructed for “Camp Toccoa at Currahee.” We later learned that local leaders, philanthropists, military historians, fans of Band of Brothers, and many others are raising money to recreate a facsimile of the original base as a lasting memorial and museum for these heroes of the Second World War. 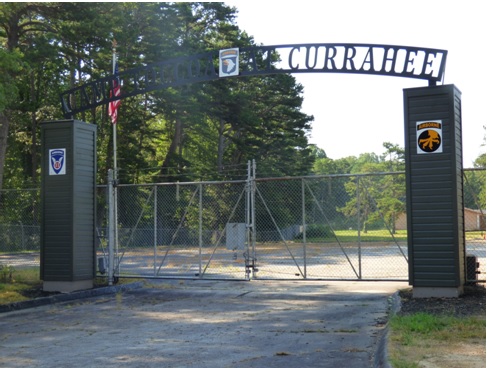 We walked in the area, reading the monuments and markers.  I learned that there were actually four parachute infantry regiments that trained at Toccoa (501st, 506th, 511th, and 517th) and who later fought in the war.  The 511th actually had the most combat jumps of these regiments, five in total, all in the Pacific Theater of Operations, while the other three regiments all jumped and fought in Europe. 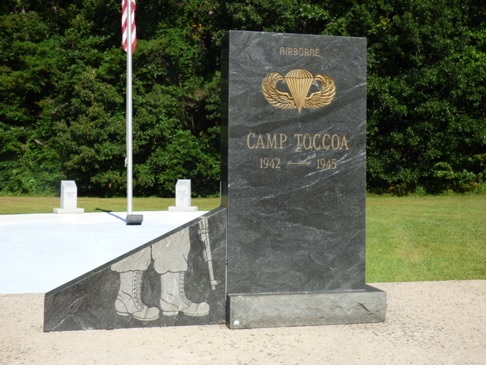 After reading the monuments and markers, we drove just down the street and immediately found the Col. Robert Sink Memorial Trail that leads to the top of Currahee Mountain.

This was what we had come for! 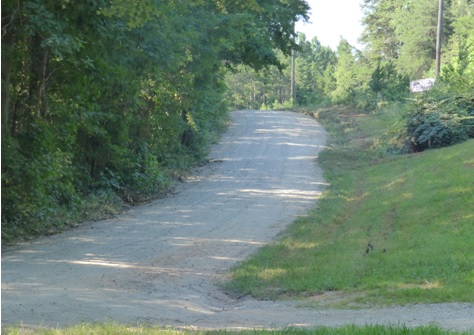 Ryan, Ethan, and I changed into the 101st Airborne shirts I had purchased to pay tribute to these heroes (my wife Laurie had no interest in tackling this challenge) and we set off for the tough challenge – “three miles up.”  (I hoped the “three miles down” would be easier.)

Ryan, Ethan, and I have all stayed pretty active throughout our lives.  We’ve all run numerous races and participate in various sports.  I think we all felt that, while we might not have been in our best shape that day, that we’d be up to the challenge…

The Georgia sun was hot.  August hot.  The trail was bone dry.  August dry.  It was also hard and unforgiving on our feet.  And the trail was steep.

We began our trek up the mountain…

Ryan, Ethan, and I traded spots at the front of our small pack.  I knew we’d each have to push through our own pain to get to the top – and we’d have to do it at our own pace.  We stayed in close proximity, but we didn’t run side-by-side.  We would each have to run this mountain alone, together.

I have to say, at the start, at least, I thought I would be able to do it – to conquer the hill without stopping.  After the initial incline, the trail flattens a bit.  Then, I was shocked, the path actually goes downward.  I said to Ryan, “They didn’t show that in the movie – an actual downhill.”

There is something special about being a dad, something I can’t quite put into words, that I feel in my heart whenever I am with my family – something that it unique and magical, and makes me very happy.  I love spending time with my family and I’m pleased that as my sons have grown that they enjoy doing things with Laurie and I…

There was also something very special about Ryan and Ethan wanting to run this hill.  I was glad that they felt the same way about the Band of Brothers as I did.  I was even more glad that of all the things in the world to do, that they expressed an interest and a willingness to do this with me.  (Next summer I’ll have to get Alex to Georgia to run the mountain.)

I felt pride in watching my sons, running, most often ahead of me, as they pushed themselves along the trail.  I thought, “What a great experience we are sharing together!”

I love quoting movie lines (something that drives my whole family nuts), and as we struggled upwards, I found myself doing exactly that – remembering and quoting lines from the Band of Brothers episodes.  It motivated me, but I’m not sure how much it helped my sons.

Running a hard and dry trail under a hot Georgia sun isn’t exactly all fun.  At times a few cars actually drove up the incline past us.  They spewed dust that arose from the thirsty roadbed that added to the challenge.

A short while later, the trail went down slightly again. “Maybe this will be easier than I thought,” I said aloud.

It wasn’t.  The trail then went up, and then further up yet again.  The angles were steep. There were no short plateaus for us to catch our breath.  It was just one steady upward trek.  And, while we wanted to, and were determined to, we just didn’t have it in us physically to run the whole thing.  We ended up walking.  As we walked, we stayed together.  We talked.  We commented on how tough a challenge this was – even while walking.  Nonetheless, we even took a moment for a quick selfie.

At times, we’d push a bit and slowly jog, but the trek was harder and more challenging than any of us thought.  Yet we forged on, gaining more respect for the soldiers who did this day-in-and-day-out with each step we took.

One driver coming down the mountain slowed down as we approached the apex and talked with us briefly.  He commented that he was impressed with our effort.  “Even in my prime, I don’t think I could do this,” he said.

As we climbed, there were a few more steep turns, but then, there we were at the top – we made it!

Ryan, Ethan, and I were at the summit of Currahee Mountain!

There actually isn’t much to see at the top.  There are electric towers with chain link fences around them.  There is graffiti and some empty beer cans.  We took little notice. We only looked for the great view, spent time looking for things we might have seen in the movie, and took a few photos together.

After making “three miles up,” we now had to get past the “three miles down” part of the challenge.  Over the years, my boys and I have hiked many miles on many hills and mountains.  We have learned that the downhills can sometimes be more challenging than the inclines.

As we made our way down, we ran a bit and we walked a bit.  We talked.  We laughed. And something else happened…

As other people saw us, as they were either walking or driving up, they acknowledged us and our effort.  One person called us “heroes.”  We were thanked by another couple for doing what we did.

We didn’t do anything special, and we didn’t even run the whole thing, but, I guess by running and walking the mountain, we kept the memories of those that came before us alive.

In a way, as we struggled up and down the mountain, the soldiers from the 1940’s did the run with us.  Maybe it is up to us nameless individuals to keep their memories truly alive as we struggle on the paths where they trained before us.  It was our small way to make sure that those honored soldiers, as Abraham Lincoln once said, “did not die in vain.”

Through the books and the movies, and in museums, and monuments, and in tributes, celebrations, songs, and parades, the members of the 101st Airborne will live forever. Their accomplishments, along with the accomplishments and sacrifices of all those who gave of themselves to serve our country must always be remembered.  I was glad to be a very small part of remembering all of them on that mountain path that day.

After walking a bit more, I was determined to run the rest of the way.  It was only probably only a little more than a mile, but I wanted to push myself that little more.  I knew I had at least that much more to give.  The boys followed.

We each made it down to the parking lot at the bottom where Laurie awaited us with her typical encouragement and beautiful smile.

We had done it, not entirely in the manner we hoped, but we made it.

Three miles up and three miles down – a wonderful 90-minutes of special time that I spent with my sons.

It was great.  It was important.  I’m very glad we did it.

Note – Following the climb, we all visited the Currahee Military Museum in Toccoa.  It was an outstanding museum that I highly recommend.  You can learn more about the museum and the Camp Toccoa at Currahee project here: