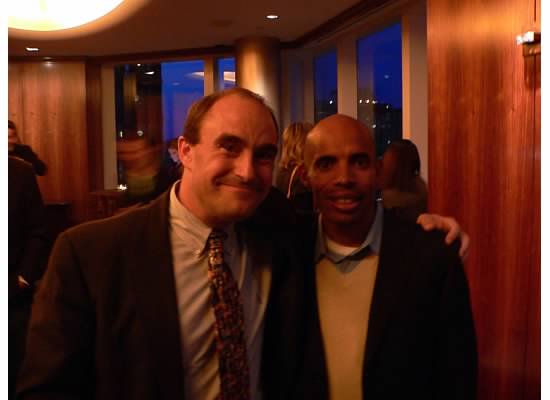 It is probably somewhat normal, even for adults, to have favorite sports figures that they root for.  Baseball, football, and hockey players, tennis and golf stars, auto racers, and others come to mind.  With that being said, there are probably few people who have a professional marathoner for whom they root.

I am one of those people.  I am fan of Meb Keflezighi.  He’s a champion marathoner.

But it hasn’t always been that way.

On Saturday, February 13, Meb will be competing in the 2016 United States Marathon Olympic Trials.  I will be watching on TV.

A few years ago, I had the pleasure of meeting Meb Keflezighi at a New York Road Runners event.  It was a special thrill.  It’s not often that I get to meet famous people.  I found Meb to be patient and kind.  I was amazed that he made time to talk to me.

I’m still hoping he takes me up on that offer.

The story of Meb Keflezighi inspires me to always strive for greatness, to always give my best, and to know that failure is not permanent.  Meb illustrates, very clearly, that one can fail, rise again…and emerge victorious.

This is a story of Meb Keflezighi.

Meb Keflezighi has proven that you can be a winner even if you sometimes fall short of your goals.

For many years, Meb was a runner who continually fell short of his ultimate goal – winning a marathon.  For a period, he became the perennial also-ran.  The runner up.  Meb was the marathoner who couldn’t win the big race.

Some people say, “Second place is the first loser.”  And second was where Meb found himself – seemingly quite often.  And then, it got worse -he wasn’t even finishing second.  He stumbled.  His career seemed to be going backwards.

But, as I often do, I get ahead of myself.  So, let’s start at the beginning.

Mebrahtom Keflezighi immigrated to the United States when he was twelve years old.  He took up running.  He ran some competitions in junior high school (winning a few) and then as a high school student in 1994, he won the California State High School Championships in the 1600 meters and the 3200 meters.

Meb then went to UCLA where he became a four time national champion.  During his time at UCLA, he set the American record for the 10,000 meters.  His career was on fast forward!

Meb then went for the next big challenge – the marathon.

People predicted greatness.  Meb was hailed as “The American Who Would Finally Win a Major Marathon.” (Marathon running has been dominated by runners from countries other than the United States.)

In 2002, Meb ran his first marathon, the New York City Marathon.  Meb finished in 9th place.  For a first race, especially in New York, that was a very respectful showing.

In 2004, Meb entered the USA Olympic Trials for the Marathon Team.  This time, he came in second.  This earned him a spot on the United States Olympic team.

Later, in the 2004 Summer Olympics in Athens, Greece, Meb came in second again, winning the Silver Medal.  This was the first time since 1976 that an American had medaled in an Olympic Marathon.

In total, in 2004, he ran three marathons and had three second place finishes.  Meb was on the precipice of greatness.  It seemed like he was ready to win a big race.

2005 arrived.  He again ran the New York City Marathon.  This time he dropped a spot and came in third.

Then came the 2006 New York City Marathon.  Many predicted that this would be Meb’s break-out race.  It wasn’t.

In that race, Meb finished in 21st place.   A disaster.  Failure.

2007 brought more struggles and more challenges.  Meb entered the London Marathon and was unable to finish.  Every marathoner’s nightmare is the dreaded DNF (Did Not Finish).  Meb now had one of those on his record.

Undeterred, Meb entered the USA Olympic Trials again.  His performance was unremarkable. He finished in 8th place failing to make the team.  He finished the race, but during this competition he seriously injured himself.  Worse, his friend and fellow marathoner, Ryan Shay, died while competing in that race.

Meb did not compete in a marathon in 2008.  Instead he competed in the Olympic Trials for the 10,000 meters, a race he used to dominate where he was a three time USA champion.  He came in 13th.  He failed to qualify.

There would be no Olympics for Meb Keflezighi in 2008.

In four years, Meb Keflezighi went from a Olympic Silver Medalist to not even being able to make the Olympic team.   He had failed to qualify at two distances – the marathon and the 10,000 meters.

Most often, elite marathoners don’t have long careers of sustained greatness.  The distance is grueling.  One only runs one to two major races a year.  To stay at the top of the field is difficult.  There always seems to be a faster, younger, better trained runner, ready to capture the top prize.

It had been a long time since Meb had even been close to the top prize.

By the end of 2008, it seemed that Meb Keflezighi might never be a marathon champion, or any type of champion again.  His great days seemed well behind him, not only in the marathon, but in the other races in which he used to dominate.

2009 arrived.  Meb raced in the London Marathon.  His previous attempt in London resulted in a race he could not complete.  This time he finished.  But, he still only came in 9th place.

In November 2009, Meb ran the New York City Marathon again.  He was not considered to have much of a chance.  Other marathoners, like Ryan Hall (The Next Great American Hope), were considered more of a favorite to win.  The television coverage did even not pay much attention to Meb.  No one seriously considered him to be a challenger…

Well, this story has a predictable ending.  You should know it by now.  Meb won!  Meb was the New York City Marathon Champion!  After years of disappointment and failure Meb won the big race!

In winning, Meb became the first American since 1972 to win this epic endurance event.

Meb Keflezighi was finally a winner!

There is a lot of talk of times when athletes should “go out on top.”  Meb had won the big game.  One could argue that The New York City Marathon is distance running’s Super Bowl.

That might have been a great time for Meb to retire.  But he didn’t.  And success also didn’t follow Meb either.

Meb was on hand to defend his NYC victory in the 2010 marathon.  He finished in sixth place.

But then came the 2012 United States Olympic Trials in Houston, Texas…This race saw Meb once again taking the top honors.  Like a phoenix rising from the ashes, Meb Kkeflezighi rose again!

That summer, in the London Olympics, Meb did not earn a medal, but he turned in an impressive fourth place finish.  He was the highest finisher for the United States.

Due to Hurricane Sandy, there was no NYC Marathon in 2012.

In 2013, Meb once again ran the New York City Marathon…and came in 23rd place.  He was never a major factor in the race.

At 38 years old, it seemed that, this time, once and for all, Meb’s winning days were over.

And then, he did it again!

In 2014, in an extremely emotional and inspirational race, Meb Keflezighi won the Boston Marathon!  He was the first American to win the race in 31 years.

On Saturday, February 13, 2016, Meb Keflezighi will once again lace up his running shoes.  He will be part of the largest Marathon Trials field ever.  373 of the nation’s best marathoners will battle on the streets of Los Angeles against Meb (and the others) hoping to be one of the top three finishers and earn a trip to the Olympics.

Meb is now 40 years old, but I wouldn’t bet against him!

This story is one of perseverance.  Perseverance is defined by dictionary reference.com as, “steady persistence in a course of action, a purpose, a state, etc., especially in spite of difficulties, obstacles, or discouragement.”

It’s a common theme that I write about – always trying, always striving, never giving up.  As long as there is a drive and a desire to improve – to get better – no matter what the odds – success is always right around the corner.

In spite of difficulties, obstacles, and discouragement, Meb Keflezighi pushed forward.  It’s this drive that inspires me.  It’s this attitude that I hope we continue to teach others.

The story Meb Keflezighi shows that persistence and perseverance pays off.  As long as each of us always gives our best, we will always be champions!

One thought on “The Story of a Winner (Meb Keflezighi)”